Why Some Men Get Circumcised As Adults And How It Works

You are here:
blogcircumcision Treatment 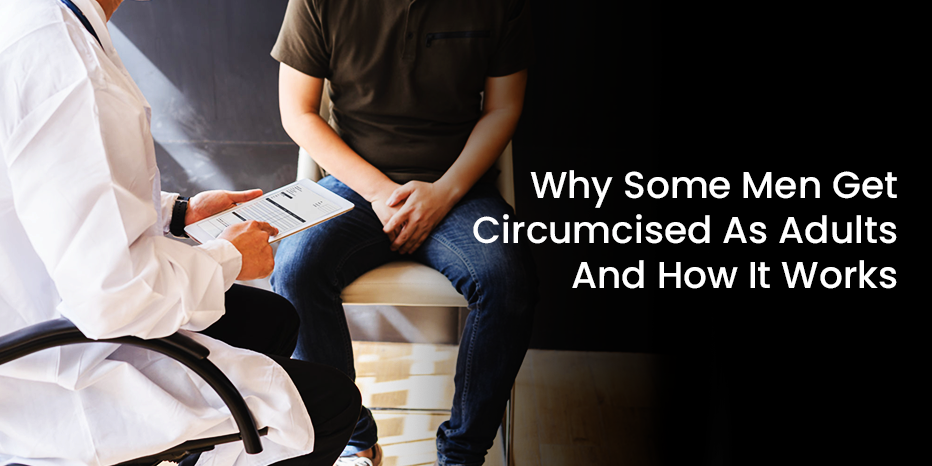 Why you should visit a circumcision hospital in Chennai

Nonmedical reasons for men to get circumcision as adults

Non-medical circumcisions are more commonly carried out in children, as decisions taken by parents from certain religious communities. Adult circumcision becomes an option for men who were not circumcised as infants. However, over 95% of men seeking circumcision are motivated by cosmetic, aesthetic and social reasons.

Cosmetic appeal – Men in their late teens or early 20s are most often to choose circumcision when they are moving out on their own or becoming sexually active. Many such adult men opt for circumcision as a procedure for cosmetic reasons that favour sexual appeal, as women seem to favour the appearance of circumcised penises. For example, a survey found that 90% of women reported that circumcised penises look better, 92% felt that they were cleaner and 85% admitted that they were more pleasant to touch.

Religious conversion – Men entering certain faith are encouraged to lose their foreskin. In one study of 42 men circumcised as adults, 39 cited religious reasons. It is a personal choice for an adult man to find circumcision as an importance for the benefit of his spiritual life. Adult men who have transformed to a different religion and wish to comply with cultural traditions of that particular religion, may find that completing the procedure has an emotional or spiritual benefit.

Peer pressure – Peer pressure seems to be one of the most influential factors for men when deciding upon circumcision. In a study, 60.8% of young men believed that they might be ridiculed by their peer group if they were not circumcised.

Health reasons for men to get circumcised as adults

Chennai circumcision for adults carries out latest, safe, bloodless procedures for a number of health reasons such as:

Improved hygiene – Circumcised penises are easier for proper cleaning. Uncircumcised penis requires extra attention with different steps in maintaining good hygiene. It is common that oil, bacteria and dead skin cells can accumulate under the foreskin and develop into a sticky substance called smegma. If smegma is not cleared from time to time or if it goes unnoticed, it can lead to painful side effects including infections like balanitis.

Sexual health – Some men may choose to get circumcised because a circumcised penis can be more sensitive and enhance their sexual experience. According to a study analysis, circumcised men reported increased penile sensitivity and enhanced ease of reaching orgasm.

Prevent STIs and HIV – Risks for genital ulcers, chlamydia, HPV, herpes and STIs have been shown to be much lower in men who have circumcised penises. Several international studies have supported that circumcision lowers the risk of HIV transmission. People who involve in high levels of sexual activity are recommended to consider circumcision as an additional measure, additional to safe sex, to prevent HIV.

Reduced risk of penile cancer – Penile cancer is very rare, but research suggests that it is even more rare in circumcised men.

Medical conditions in men to get circumcised as adults

Adult men are advised medical circumcision most commonly when the foreskin is tight and won’t pull back (retract) or in case of conditions like urinary tract infections or infertility. Circumcision is sometimes considered a possible treatment option for the following conditions:

How circumcision works in adult men?

Circumcised males do not develop phimosis, para-phimosis or balanitis because the foreskin, the major cause of these conditions is removed. Chennai circumcision for adults aids in lower risk for infection, HPV and penile cancer possibly because of the mechanisms by which male circumcision allows more penile cornification, lower rates of penile injury during intercourse and fewer HIV receptors. In addition, female sexual partners of circumcised men have been shown to have reduced risk of cervical cancer and chlamydial infection.