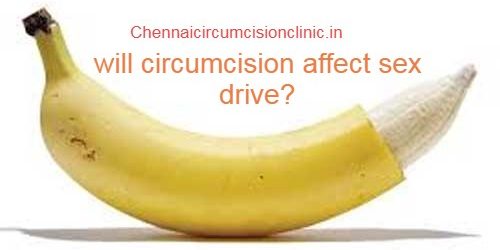 “Will circumcision affect sex drive ? NO.

” Circumcision has always been erotically misinterpreted. It is a common misconception that the foreskin is the only male erogenous tissue or erogenous zone that contributes to a man’s sex drive. In contrary, the foreskin represents only a small part of the penis and only a tiny fraction of men’s total, erotically excitable skin surface. The penile foreskin is a simple fold of skin composed of an outer keratinized (skin) and inner (mucosal) layers that are rich in nerves. Theoretically, partial or total surgical removal of the prepuce leaves the somatic penis sensory fibres exposed to direct stimulation and in theory could benefit sexual function. So, it is only the psychological impact of loosing the foreskin that can creep in to adversely affect a man’s sex drive.

Male sexual function has been considered as a neurobiological phenomenon relying on psychological inputs. Sexual drive is usually described as libido. A low libido means a decreased interest or desire in sex. The male libido lives in two areas of the brain: the cerebral cortex and the limbic system. These parts of the brain are vital to a man’s sex drive and performance. They are so important, in fact, that a man can have an orgasm simply by thinking or dreaming about a sexual experience. The cerebral cortex is the part of the brain that’s responsible for higher functions like planning and thinking including sexual thoughts. On such arousal, signals that originate in the cerebral cortex interact with other parts of the brain and nerves. Some of these nerves speed up the heart rate and blood flow to genitals. They also signal the process that creates an erection. The limbic system includes multiple parts of the brain that are involved with emotion, motivation and sex drive. It is reported that sexually arousing images increased activity in parts of the brain mainly the amygdala that experiences emotions.

It is notable that conditions of foreskin leading to high risk penile problems are more common reasons for sexual dysfunctions and low libido in men. The absence of foreskin is not directly correlated with sexual dysfunction in men, whereas, penile foreskin conditions are. Men with penile conditions cannot feel the best sexual pleasure and hence avoid situations of sexual intimacy. The Kaohsiung Journal of Medical sciences 2014, based on a study, stated that the differences in increasing sexual drive after circumcision were significant. They found that sexual performance after adult circumcision were improved among the patients, especially in sexual drive and confidence of erection. Studies by Finketal and Shendtal, both reported that adult circumcision appeared to result in improvement of sexual satisfaction. Their study showed that the differences in the BMSFI ( Brief Male Sexual Function Inventory for Urology ) scores were statistically significant, especially in the increased sexual drive after circumcision.

Several other studies reported the effects of circumcision on sexual drive, all of which did not find a statistically significant difference between the circumcised and the uncircumcised individuals. In those studies, the participants were sexually active young adults, and had sexual intercourse 2 months after the procedure. They also reported that long duration of abstinence may increase their sexual motivation. Moreover, the self-confidence obtained through circumcision may also increase their sexual drive. Many studies that provided clear data were case–control studies. The prevalence of low or lack of sexual desire across the studies in circumcised men was generally low and heterogeneity between the studies was minimal. There was no difference between the prevalence of low or reduced sexual desire in circumcised men.

In an aim to investigate the psychological and sexual effects of circumcision in adult men and analyse the changes following circumcision, the Canadian Urological Journal Association explained that body image is a multidimensional concept involving perception, attitudes, thoughts, beliefs, feelings and behaviour of the individual. It may be defined as the picture of one’s own body in one’s own mind. An anxiety situation in which the individual continuously carries the fear that he will be embarrassed, humiliated and considered ridiculous or clumsy of loosing a body part could be the factor associated with avoidance of sexual activity in newly circumcised men. Individuals with a negative body image are known to avoid meeting with new people, being in social situations and sexual relationships. Psychoanalytic views have hypothesized that preputium was considered as part of the penis and that its removal could cause perception of physical deficiency. However, a study based on these findings indicated that being circumcised contributes to long term psychosocial and sexual well-being of individuals in adulthood.

These studies have provided information that are useful in advising prospective men for circumcision. It is advisable that men overcome the apprehension of circumcision affecting their sex drive and head towards best available circumcision procedures for a healthier sex life. Only a man can measure what is normal for his sex drive. It can be difficult to discuss about sexual desires, but sexologists and urologists can definitely be of help. In experiencing libido changes in circumcised or uncircumcised men, it is best to consult the specialist for tight foreskin surgery.