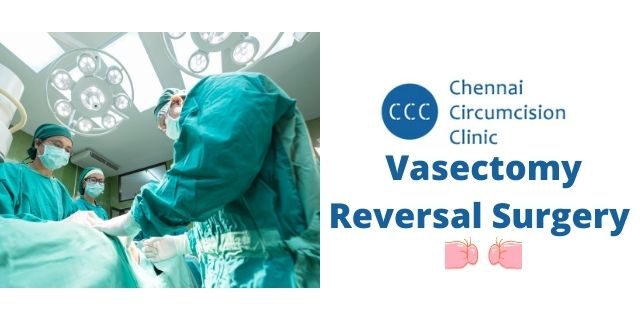 Vasectomy is a surgical procedure in which the tubes carrying the sperm are disconnected in the scrotum. Once the two tubes are disconnected (one from each testicle), the sperm produced by the testicles remain in the body and get absorbed after a few days. However, other seminal fluids are produced by the prostate gland and they are ejaculated. The vasectomy procedure is the safest birth control option for men.

Can a vasectomy be reversed?

What is done during the vasectomy reversal procedure?

Before you read through what is actually done during the vasectomy reversal procedure, let us give you brief anatomy of the male reproductive system. The Testicles produce sperms that travel to the epididymitis where they get nurtured and grow fully. A tube called vas deferens or just ‘vas’ runs from the epididymitis to the prostate that will carry the sperms to the prostate where they get mixed up with the seminal fluids and are ejaculated out.

During vasectomy procedure, the vas deferens are disconnected and scarred at the ends of tied up so that the sperms will have no way out from the body. No sperms mean no pregnancy.  In a vasectomy reversal procedure, the idea is to reconnect the tubes like they were before. But, as the ends of the tubes are scarred, the ends are cut off a little and are reconnected. This may or may not be a successful procedure because, if the tube at the lower end (connecting to the epididymitis) is blocked for some reason, it may not allow the sperms to flow out. In such cases, the other part of the tube (that runs to the prostate) is plugged directly into the epididymis.

In this procedure, the scarred tips are cut off and the lower part of the tube is tested by the doctor before connecting it with the upper half of the vas. If the lower tube is fine and is capable of allowing the movement of sperms, the two tips of the disconnected vas are sutured with hair-thin suturing material. Vasovasostomy works in about 85% of men. The success of vasectomy reversal procedure through vasovasostomy is 55%, meaning, men who underwent vasovasostomy have only 50% chances to impregnate their partner(s).

If the lower part of the tube is blocked and is not capable of allowing the sperms to pass through, the upper part of the vas deferens is directly plugged into the epididymis. This is called ‘vasoepididymostomy’.  As you can imagine, this is a little complex procedure compared to vasovasostomy.  In some men, vasovasostomy may be done on one side and vasoepididymostomy may be done on the other side.

What happens after the vasectomy reversal procedure?

Sure, it is a painful process and the pain is managed by pain medication or pain killers that your gynecologist will put you on. The procedure is done as an outpatient procedure and won’t need any hospitalization. Good rest is recommended for a week and you will be advised not to lift any weight or put any kind of pressure on the pelvis region.

Why do men want to undergo vasectomy reversal?

The reasons why men want to undergo vasectomy reversal can be:

What if vasectomy reversal fails and you still want to become a father of your own child?

There is a way to become a father of your own child if your vasectomy reversal fails. There are only a very few trained and experienced sexologists in Chennai to perform this procedure, called, [Sperm retrieval or sperm aspiration.

In the sperm aspiration process, the sperms are extracted from the epididymitis, and then IVF, IUI, or ICSI procedures are used to fertilize the egg in/of your female partner.

How To Treat Balanitis Permanently In A Day
November 29, 2021

Circumcised Vs Uncircumcised – What is The Difference?
November 12, 2021

Benefits of Male Circumcision to a Woman
November 5, 2021

Why You Should Not Delay Your Circumcision Surgery
October 21, 2021
Recent Posts
Go to Top